We have a different kind of program today, focused on just one person, filmmaker Julia Reichert. She died Thursday night at her home in Yellow Springs. She was 76 years old and had been fighting an incurable cancer since 2018. She was born and raised in New Jersey, and came to to study at Antioch College, attracted by the college’s coop program in the late 60s.

Reichert was known as the godmother of American independent film, a mentor to generations of young filmmakers, and a professor of film at Wright State University for 26 years.

WYSO’s Neenah Ellis interviewed Julia Reichert a year ago, just before The Neon in Dayton screened a retrospective of her career. In a wide ranging conversation, while Reichert was in treatment at the James Cancer Hospital in Columbus, she talked about her her life and her films and the values that inspired her. career and life – especially her early years - when she got her start in media at WYSO.

Included in today's program are; Jonathan McNeal with The Neon in Dayton, Lois Vossen with PBS, and Tonia Davis, head of television and film for Higher Ground Productions.

Jerry Kenney
Jerry Kenney was introduced to WYSO by a friend and within a year of first tuning in became an avid listener and supporter. He began volunteering at the station in 1991 and began hosting Alpha Rhythms in February of 1992. Jerry joined the WYSO staff in 2007 as a host of All Things Considered and soon transitioned into hosting Morning Edition. In addition to now hosting All Things Considered, Jerry is the host and producer of WYSO Weekend, WYSO's weekly news and arts magazine. He has also produced several radio dramas for WYSO in collaboration with local theater companies. Jerry has won several Ohio AP awards as well as an award from PRINDI for his work with the WYSO news department. Jerry says that the best part of his job is being able to talk to people in the community and share their experiences with WYSO listeners.
See stories by Jerry Kenney 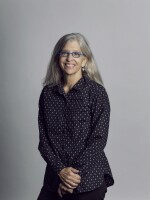 Neenah Ellis
Neenah Ellis has been a radio producer most of her life. She began her career at a small commercial station in northern Indiana and later worked as a producer for National Public Radio in Washington, DC. She came to WYSO in 2009 and served as General Manager until she became the Executive Director of The Eichelberger Center for Community Voices where she works with her colleagues to train and support local producers and has a chance to be a radio producer again. She is also the author of a New York Times best-seller called “If I Live to Be 100: Lessons from the Centenarians.”
See stories by Neenah Ellis
More Episodes