Read Aloud Radio is a new feature by Community Voices producer Jonathan Platt. He has organization called Story Chain, which brings families together through the reading of children’s books. And through this work, he’s come upon a lot of children’s books that are great to read aloud. For the next few weeks, he’s going to recommend some of them.

You probably know the story of Charlotte's Web by E.B. White. A young pig is saved from the ax and is then moved to the Zuckerman barn. He meets a host of animals, including a talkative goose. In this episode, Elizabeth Wells, mother of two daughters from Fairborn, reads Wilbur's story.

Read Aloud Radio is produced at the Eichelberger Center for Community Voices at WYSO. 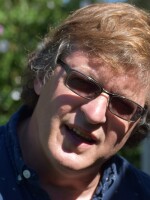 Jonathan Platt
Jonathan Platt is the founder and Executive Director of Story Chain, a literacy intervention program that started in prisons and jails and has now expanded to other populations including the developmentally disabled, senior citizens and youth services. Jonathan is a proud graduate of WYSO’s Community Voices 2014 and has produced several featured presentations such as Culture Couch and special reporting on Hispanic heritage. WYSO has worked with Story Chain since its inception and plans to have many more fruitful years to come.
See stories by Jonathan Platt
More Episodes
More Podcasts