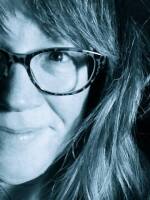 Lori Anne Gravley
Lori Anne Gravley began recording poems for Conrad’s Corner in 2015, and she quickly began helping Conrad produce the program during his extensive travels. She has published her own poems widely in literary magazines and anthologies and has recently completed a chapbook “We Say Water” and a full-length collection, Turbulence. She has been nominated for a Pushcart Prize and for Best New Poets. When she isn’t wandering in the world, she lives in Yellow Springs with her husband, two dogs, and an ever changing variety of stringed instruments.
See stories by Lori Anne Gravley