The coronavirus pandemic has each one of us trying to figure out just how we’re gonna get through it all. Today we hear how community producer Leah Byrd has been doing it. A graduate of Wright State University’s film program, Leah has received a lot of buzz for their comedy web series, called Hot & Bothered, for which they were writer, director, and star. Here’s their West Dayton Stories covid commentary:

The week of March 11th. That was when COVID began affecting my mental health. During that week, travel to foreign countries, major sporting events, and what felt like everything else was shutting down. Only four days later, the state of Ohio was put on lockdown. That first week was the worst. The initial shock and disbelief--my mind was spinning for days trying to grasp this new and sudden reality. It's as if you could feel a global shift of stress levels peaking. And all we got in return was every single commercial saying, “We're all in this together!” And let me tell you, when I am 23 minutes deep in an episode of 90 Day Fiancé, the last thing I want is my Hulu ad reminding me of the state of the world. That it's on fire. I don't want to be reminded.

Trash TV and video games have been a useful decompressing tool. Having something to distract from the overwhelming amount of depressing news is quite nice. When the shift first happened, it really forced me to reevaluate my goals and expectations for this year. I definitely lowered my expectations for producing film work.

I honestly initially lost all creative drive at the beginning of lockdown, but, you know, once the depression began to wear off, I started focusing on making songs. Writing and singing has been very therapeutic for me. And I tend to attach a lot of self-worth in being productive because, you know, capitalism. But being able to still create something right now is keeping me going and being able to create something brings me the most joy.

There have been so many ups and downs since lockdown. Some days are definitely easier than others, but to be honest, I think I'm starting to get used to this--this new shift in perspective, living in post COVID America. 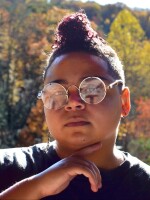 LB (Leah Byrd)
LB (Leah Byrd) is a Dayton born and raised writer, director, actor, editor, and singer. He has a BFA in Motion Picture Production from Wright State University. LB is most well known for his comedic web series, Hot & Bothered, which has screened across the country, internationally, and which won Favorite Youth Film at the BlackStar Film Festival.
See stories by LB (Leah Byrd)