Seasons are changing, and back to school time has arrived again. Inspired by a social media meme making the rounds earlier in the summer, we asked our music hosts here at WYSO to reminisce on their high school years and pick four albums that they found or were released during that time that have stuck with them ever since. Today's picks from the past come to us from Around The Fringe's Andy Valeri.

The Clash - Give ‘Em Enough Rope

It was during a visit to The Forest record store on Wayne Avenue one winter’s day early in 1979 (somewhat rare at the time, as I had yet to obtain my driver’s license), when the employee there pulled out a record and put it onto the turntable of the store stereo system. It was a relatively recent release by this English band called The Clash, whom my friends and I, as 16-year old high school kids in Dayton, Ohio, had heard vague references to but knew little to nothing about. When the needle dropped onto those vinyl grooves, and those first explosive, now iconic notes from “Safe European Home” blasted their way out of those speakers, I was propelled into a whole new realm of musical awareness that would forever alter my musical (and eventually) social consciousness.

I was always (and remain) a huge Beatle fan, a band that were the centerpiece of my musical and cultural universe in my youth. And of all of the Fabs, John Lennon was my man, a kind of cultural hero, my single greatest inspiration as a young, impressionable truth-seeking teen looking to break creative boundaries. And during those formative years, John Lennon remained both the most present of all such cultural figures to me, but also the most elusive, as he had checked out of the whole music and celebrity scene for many years in order to raise his new son. So when word came out that he was back in the studio, preparing his first release in five years, I was over the top with excitement, about as stoked about the arrival of a new record as one could ever be. It came out the week of my 18th birthday, and I was literally first in line at The Forest record store for their special evening sale, where I literally took the very first one out of box they just unsealed. That whole experience of anticipation, of seeing Lennon coming back on the scene, of being that youthfully enthusiastic about an artist’s new creative venture, and then only to have a few days later, well, we know what happened.

Though I had become a passionate fan of The Clash, for some reason that interest never translated over into any of the rest of the punk/new wave scene at the time. It was only during the summer of 1980 at the end of my junior year in high school, when my sister’s boyfriend at the time lent me a few albums that opened up a whole new lexicon of music, along with the social/cultural scenes that were behind them - The B-52’s debut LP, Devo’s Are We Not Men? and the Sex Pistols’ Never Mind The Bollocks. I had heard of Devo and the Pistols for years, mainly through the slagging off they repeatedly got through media hype around them, and probably dismissed them because of that. But certainly no longer. With the Sex Pistols, the sheer amplified power of it, the in-your-face challenge to the status quo, and the fact that it was great rock, gave a group of us snarky, know-it-all teenage boys a musical soundtrack for a kind of rebellious resistance to a world we could already identify as being riddled with too much hypocrisy and self-serving power. The Pistols’ were a kind of cultural flash bang grenade being tossed into the middle of a staid and tiring rock (and political) culture at the time, blowing a hole wide open for a whole new realm of cultural and creative possibility. The DIY nature of it was really inspiring. And promoting one’s support for this new music also became quite the fodder for the silly cultural tribal battles that take place in the halls of high schools, as well. For at that time there was a very clear line between the fan base of the ‘classic’ and traditional rock scenes, and the new emerging punk/new wave scene, that’s for sure, and exhibiting one’s affinity for something like Never Mind The Bollocks was an assured way of stoking some pretty heated arguments among classmates, to say nothing of the rest of society at the time.

The Who (plus others) - Quadrophenia (Film Soundtrack)

In December of 1979, the Dabel Theater where I worked featured the new film release Quadrophenia, a cinematic telling of the story of the beauty and exhilaration, along with the pain and angst, of coming of age through teenage adolescence, inspired by and encapsulated in The Who’s classic concept album of the same name (and whose music is prominently featured and anchors the film). Working at the theater, I was offered the opportunity to become immersed in the film and the music, in which the trials and tribulations of friendship and belonging, one’s sense of personal identity, sexual awakenings, everything that stirs up and must be reckoned with during those years of life, and which were being experienced by myself at the time, seemed to be reflected back to me in real time through the film and the music. I can’t help but still recall many of those emotions and experiences again to this day when hearing much of that music.

(*It wasn't long before I had acquired the original Quadrophenia album as well, along with a fair amount of Pete Townshend's and the Who's other catalog, corresponding to yet another related musical and cinematic event during high school; the release of the Who's film The Kids Are Alright, another touchstone cultural experience during those times.)

When we asked our hosts to reflect on this musical time in their lives, we discovered two different ways to choose albums: 4 albums released during their high school years, or 4 albums discovered during their high school years, regardless of release date. We welcomed the hosts to take up both sides if they desired, and Andy provided these additional albums for the latter idea:

The Beatles (pretty much ALL of it)

It would be impossible to discuss important or influential music during my high school years without noting the Beatles, and pretty much every aspect and element of their catalog. No one work would stand out, as they are all part of a unifying, influential whole – a musical and cultural catalog that was extremely influential to myself and my friends in encouraging a creative energy and spirit that remains to this day. My friend Steve Bognar and I made our own audio collage recordings, inspired by things like "Revolution 9”, as well as our many films, often laced with with direct influences from the Fabs. This interest included their various post-Beatles solo works, too, as well as whatever bootlegs I could get my hands on at the time. So it was the Beatles that got me into the lo-fi rock scene long before Guided By Voices came along.

My older sister had this album, which I absconded off with and found myself listening more and more to it over my high school years. Not only did I find it a powerfully engaging piece of work, it was a sort of gateway introduction to a whole new realm of rock to me, from that Laurel Canyon scene which I slowly but surely absorbed over time, but also as a way of introducing me to who Neil Young was, who David Crosby (and thus The Byrds) were, etc. The connecting thread to lots of the music I love and appreciate to this day came out of this record.

Another of those albums I “inherited” from my sister’s collection, one that was a staple of my early teen years, serving as a benchmark for what comprised great pop rock. The cinematic scope of the work, and the infectious songwriting underlying it, was inspirational, and along with the rest of Elton’s early catalog, an ever-present component of my musical listening habits at the time.

Coming near the tail end of my high school experience, I had been visiting my sister down in Athens, Georgia, and her boyfriend (later husband) had tickets to a show at the now legendary Tyrone’s, so I went with her, using his ID to sneak me in underage. At 18, it was one of my first *adult* musical club experiences, and it was to see a band touring from Britain, The Stranglers. I had *never* seen or heard anything quite like them, completely dressed in black, caustic, cerebral, very Euro-centric in their sensibilities, but punk, pop, prog rock, all of it, mixed together. And I was instantly hooked. Upon returning to Dayton, I immediately purchased one of their latest albums (a U.S. only hybrid release), and became a hardcore follower of their work for years. Their Gospel According To The Meninblack album at the time (which they were touring for when I first saw them) was years ahead of any of the techno-prog stuff being done then or since, and albums like The Raven still stand as some of the most distinctive, timeless pieces of dark yet at times strangely uplifting music.

Listen to Andy fill-in for Rev Cool on Around The Fringe, Friday nights from 8-10 PM. 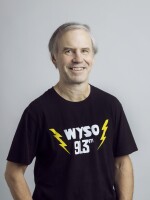 Andy Valeri
Andy Valeri is a lifelong lover of music since first digging into his parent’s record collection at the age of three. He is deeply involved in both the listening and collecting of it as well as its production and promotion, having owned and operated his own record and publishing company, and doing hundreds of hours of on air DJ’ing at WYSO. He has long served as the Rev. Cool’s right hand man back up on ‘Around The Fringe,’ and has occasionally filled in as host of ’The Jewel Case’ and ‘Excursions’ as well. Community media is Andy’s vocation, with well over three decades of professional experience in it, including through academic and civic engagement in local and national media policy.
See stories by Andy Valeri
Latest Stories