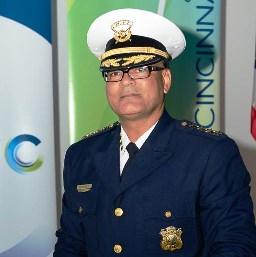 At City Hall, the former chief, Jeffrey Blackwell, told reporters he had not seen or read City Manager Harry Black's report. He said, Wednesday morning, he was "escorted out like a criminal."

Last week, Council Member Wendell Young, a former police officer, said he thought it was time for Blackwell to go. But, at Wednesday's council meeting, he said he did not like the way it was done, with no opportunity for Blackwell to respond.

"This has been bad theater here,'' Young said, directing his remarks to Cranley. "Mr. Mayor, you created this atmosphere; this is on you." 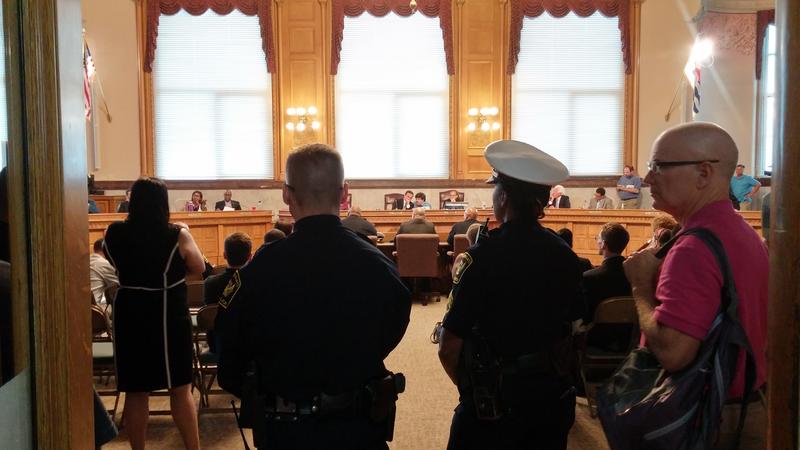 Update 1:49 p.m.: Interim Police Chief Eliot Isaac told a meeting of Cincinnati City Council that he will wants to "assure the citizens of this city that we will not go backwards during my tenure as acting police chief."

Isaac said he would continue to implement the collaborative agreement that grew out of the 2001 riots "because I lived it."

"We will focus on the spike in violent crime,'' Isaac said.

Mayor John Cranley asked that two people be removed from council chambers for shouting out while Cranley was speaking.

"I don't understand the urgency of firing a person on the same day that a climate assessment was delivered,'' Simpson said.

Simpson said it was her understanding that Blackwell was not given an opportunity to respond to City Manager Harry Black's 35-page "climate assessment" of the police department, which lead to Blackwell's firing.

Council member Chris Seelbach, another supporter of Blackwell, said that "instead of being at fancy dinners and ribbon-cuttings, he was in our neighborhoods, building relationships."

Update 1:45 p.m. City Council convenes, after a period of public comment. Former Chief Jeffrey Blackwell was in the room briefly.

Mayor John Cranley opened the council meeting by saying that "obviously this is a critical moment for our city." He turned it over to City Manager Harry Black, who outlined the details of his investigation, which led him to fire Chief Jeffrey BLackwell this morning.

Update 1:04 p.m.: Bishop Bobby Hilton said he was troubled by the news of Blackwell's firing.  He was planning to speak at a rally on the steps of City Hall in support of Blackwell when word of the firing surfaced. Hilton said he was also planning to speak with the mayor but had not had a chance to read the memo from the city manager outlining the reasons for the dismissal.

"I thought that Chief Blackwell did a good job.  I really did," Hilton said. "With what he was faced with, I thought he was doing an excellent job."

In a 35 page document, City Manager Harry Black cites "lack of sufficient and proper communication" and "consistent and pervasive disregard for chain of command."

Morale in the department, Black wrote, "is at an unprecedented low level, and the general sentiment throughout the department is that Mr. Blackwell's  leadership has created a work environment of hostility and retaliation."

Documents included in the city’s release outline myriad problems with the chief and his leadership style. He is depicted as unprofessional, uncommunicative, and disrespectful to officers and other staff. There are repeated instances of the chief reportedly berating co-workers.

In a statement, Captain Paul Broxterman says the chief asked him, on several occasions, to use his contacts with the Cincinnati Reds  and Bengals to get free game tickets. Broxterman says the chief often made promises he wouldn’t fulfill. He adds the assistant chiefs were frequently frustrated over a lack of communication and direction from the chief. “They clearly felt powerless in the day-to-day operations of the department.” Broxterman does praise the chief for being passionate about community outreach, especially reaching out to the city’s youth.

Other complaints include the chief allegedly using profane language and harsh, berating language with co-workers, and taking 'selfies' along the funeral procession route for Officer Sonny Kim.

Blackwell, a former assistant police chief in Columbus, was sworn in as Cincinnati's police chief on Sept. 30, 2013. He was hired by Black's predecessor as city manager, Milton Dohoney, who resigned as city manager after John Cranley was elected mayor in 2013.

Last week, WVXU reported that Kathy Harrell, the president of the Cincinnati Fraternal Order of Police, was planning on holding a "no confidence" vote among its members on Blackwell's leadership on Sept. 14.

That vote is a moot point now. Black ended it Wednesday morning.

"I have repeatedly attempted to direct and assist Mr. Blackwell in addressing these

shortcomings, but he has failed to take my direction and accordingly the problems have persisted," Black wrote. "Several months ago as a means of addressing CPD communications and organizational unity issues, I solicited the assistance of an outside facilitator to conduct a team building session with Mr. Blackwell and top command staff. However, this effort did not lead to an improvement in working conditions within the department."

In his memo to Mayor John Cranley and city council members, Black said that "formal and informal" feedback from a variety of sources indicate that Blackwell used "verbal abuse and insult to convey authority."

"It is important to note that the incidents that have been relayed to me span the spectrum of rank, gender and race,'' Black wrote.

Blackwell has also "a disregard for the chain of command." He said the police chief has "alienated and disregarded his executive team - the assistant chiefs - which in turn has led to poor communication to the remaining command staff regarding departmental changes, direction and objectives."

So many things the public doesn't know..but we as a police department are in much better hands now with Isaacs. Time to move forward.— Kyle Strunk (@lionsFan886) September 9, 2015

My statement on the firing of Chief Blackwell. pic.twitter.com/kZAFasnofJ— Chris Seelbach (@ChrisSeelbach) September 9, 2015

@lionsFan886 the citizens of this city will not sit silent. Our voices means more than the dirty FOP and Cranley— Grover Cleveland (@camhardy513) September 9, 2015

Here is the city manager's memo and related documents released by the city relative to the Chief's firing.

Here is the city's Climate Assessment: