Audrey Hackett reads her poems "Catalpas" and "Poet of Quiet" 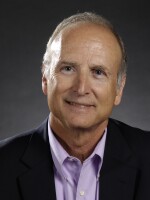 David Lee Garrison
David Lee Garrison taught Spanish and Portuguese and chaired Wright State University’s Department of Modern Languages, retiring in 2009.  His work has appeared widely in journals and anthologies, and two poems from his book Sweeping the Cemetery were read by Garrison Keillor on The Writer’s Almanac.  The title poem from his Playing Bach in the DC Metro was featured by Poet Laureate Ted Kooser on his website American Life in Poetry and read on the BBC in London.  David won the Paul Laurence Dunbar Poetry Prize in 2009 and was named Ohio Poet of the Year in 2014.  His most recent book is Carpeing the Diem: Poems about High School from Dos Madres Press.  He has been reading poems on Conrad’s Corner for about twenty years, and with Lori Gravely became co-producer of the program last year.  David lives in Oakwood, Ohio, with his wife, Suzanne Kelly-Garrison, a novelist, poet, and professor of law at Wright State.
See stories by David Lee Garrison