Grant is a former Flyer himself, having played for the team in the 1980s.

Grant follows Archie Miller, who coached the Flyers for six seasons. Grant was head coach with Virginia Commonwealth and Alabama before working with Oklahoma City.

Also, Miami has hired Purdue assistant Jack Owens as its 27th basketball coach. Owens has been an assistant at Purdue for nine seasons, including the past six as associate head coach.

The RedHawks fired John Cooper on March 10th after they went 11-21. 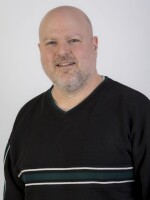 Mike Frazier
A chance meeting with a volunteer in a college computer lab in 1987 brought Mike to WYSO. He started filling in for various music shows, and performed various production, news, and on-air activities during the late 1980s and 90s, spinning vinyl and cutting tape before the digital evolution.
See stories by Mike Frazier
Latest Stories
Related Content