As we finally make our way into 2021, WYSO asked our music hosts to take one last look back on the year that was 2020, and give us their favorite selections from an unorthodox year in music. Today, we'll feature picks from The Dear Green Place's Cindy Funk.

Hello all. I’ve been asked to sum up 2020… in terms of the music I play on The Dear Green Place. I wish I could say that the musicians in Celtic music were on the road, keeping audiences happy with great songs and blinding sets of tunes. But I can’t.

Celtic musicians were like the rest of us, sitting home, and not making any money. All the tours and music festivals that had been arranged a year before were suddenly kaput with huge sums to obtain working visas in the US lost. Therefore, musicians who weren’t touring, were also largely not spending dwindling cash to record new albums. It was a bad year for new releases. And just when we thought that all was lost, who came to save us? The Internet!!! Suddenly, bands and solo artists were performing online to scores of happy fans who, in the midst of the Pandemic, were thrilled to be enjoying their favorite artists from their own comfy couch. Everyone safe and sound. The artists were thrilled as well to be performing at all, and being able to reach out and touch their fans when they thought it would never be possible. And the music festivals and music venues joined in, either playing past concert footage, or inviting artists who had been booked before everything shut down, to play a set in in their own backyard.

The next thing we knew, acclaimed artists like Christy Moore, Phil Coulter and many others were livestreaming from their living rooms… Daoiri Farrell was hosting small, socially distanced soirees in his kitchen. Major Celtic festivals like Milwaukee, Celtic Connections from Scotland, the Celtic Roots Festival in Ontario, were arranging series of online concerts, trying to even partially reclaim the feeling of joining together in the summer heat, listening to music, sweet music.

So, if I pick out the best of the year for the music that I play on The Dear Green Place, I say: Thank You, Internet! And don’t go away now, I think we’re going to need you in 2021 too!

Listen to Cindy every Sunday afternoon from 1-3 PM on The Dear Green Place. 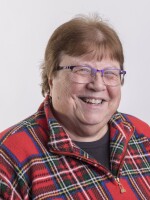