Trump Rallies GOP Base In Lebanon

President Donald Trump came to Lebanon Friday night to tell an enthusiastic crowd in a Warren County Fairgrounds building that the confirmation of Brett Kavanaugh to the U.S. Supreme Court was more than just a victory for himself and Senate Republicans.

But Trump argued that the controversy over Kavanaugh's nomination has resulted in a change of the political winds and could carry Republicans through the midterm elections.

According to Trump, it set off a groundswell of Republican enthusiasm that will allow the GOP to keep control of the Congress in the Nov. 6 election.

"Did he get treated badly or unfairly or what?'' Trump asked the more than 3,000 supporters at the fairgrounds of Kavanugh. "But what he did was a service to us. He got Republicans energized."

And to drill home the point, Trump stopped halfway through his speech to call Ohio's Republican Senate candidate Jim Renacci, who is challenging Democratic incumbent Sherrod Brown, up to the stage to deliver his own campaign speech.

"The crowd here loves you,'' Renacci said. "Ohio loves you. And Ohio loves what you are doing."

And Trump, who spoke for nearly an hour, also called Rep. Steve Chabot, who was in his First Congressional District Friday night, and is locked in a tough fight for re-election with Democrat Aftab Pureval.

"Do you know how many Democrats it takes to screw in a light bulb?" Chabot asked. "None, because they prefer to be in the dark."

The U.S. Senate is split with 51 Republicans and 49 Democrats, and the Democratic Party is trying hard to claim control of the Senate, along with the House.

Trump argued that recent GOP polling shows that Republicans are ahead in Senate races that, earlier this year, they believed they had no chance of winning.

"We are ahead in Senate races we weren't even going to contest,'' Trump said.

He told the crowd Republicans need to keep control of the Senate because "we may have 2, 3, 4 more choices for the U.S. Supreme Court."

Trump, to the delight of the crowd, ratcheted up the anti-Democrat rhetoric. 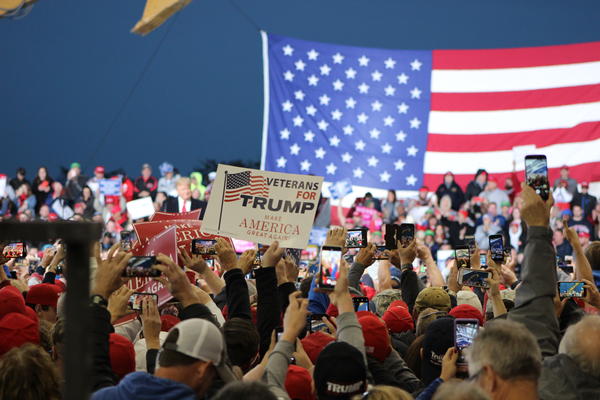 If Democrats win control of Congress, Trump said, "they will try to raise your taxes, impose socialism, take away your health care, and take your jobs."

Aside from Renacci and Chabot – the candidates Trump wanted to feature – the president mentioned a number of other high profile Ohio Republicans who were present in Lebanon – Sen. Rob Portman, Ohio Republican Party chairwoman Jane Timken, Secretary of State Jon Husted, who is Mike DeWine's lieutenant governor running mate. But not DeWine, who was not present.

Trump did, however, spend some time bashing DeWine's Democratic opponent, Richard Cordray. Cordray was head of the federal Consumer Financial Protection Bureau and Trump wanted to get rid of him, but couldn't do it because Cordray had a set term.

"You're going against a very bad guy in Cordray,'' Trump said. "He was hurting people and he was enjoying it. Ruining companies that wanted to loan money to working people.

"Go with DeWine please,'' Trump said. "Cordray would be a disaster for Ohio."

It would not be a Trump rally unless there was some media-bashing.

Pointing at the TV cameras and journalists on a riser in front of him, he asked the crowd, "How would you like to do this every night?"

There was no lack of enthusiasm inside the hall or on the outside as people lined up all day to get inside the event, which required an RSVP on the Trump campaign website. 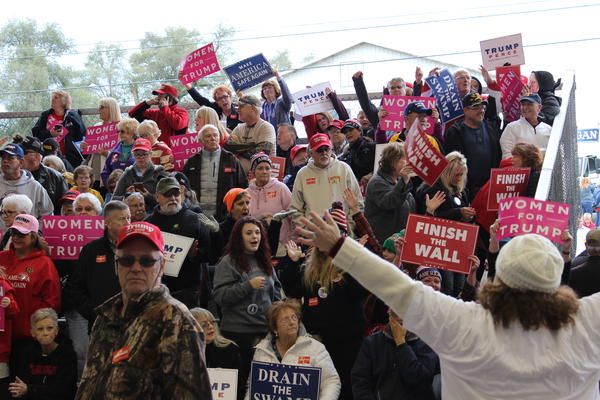 Some people started lining up on N. Broadway outside the gates to the fairground Thursday night – apparently in hopes of getting a spot close to the stage where the president would speak.

The lines became longer during the day Friday, with hundreds of anxious Trump fans wearing the paraphernalia of the 2016 election, including the ubiquitous red "Make America Great Again" ball caps.

Most of the people in the crowd appeared to be fired up and convinced that the GOP could snatch victory away from the Democrats in this midterm election, replacing the Democrats' "blue wave" with a red one.

One Trump supporter, Sam Valenti of Hilliard, Ohio, was not so certain.

"You don't know what's going to happen until the day of it,'' Valenti told WVXU. "You're hearing a lot of things, back and forth, between blue wave and red wave.

"I think it's one of those things where polls can't predict it,'' Valenti said. "The day of is when everybody finds out."

Marcie, a Cincinnati Trump supporter who did not want her last name used, told WVXU, that she believes Trump and the GOP are quietly putting together a successful campaign to keep control of Congress.

"I think a lot of Republicans are quiet because we don't run around disrupting everybody and getting in people's faces and bothering people in restaurants,'' Marcie said. "We mind our business and go out and vote. We respect everyone's right to free speech. We try to be civilized. So they don't know how many of us are out there but there are a lot of us."

Marcie said that if the Democrats win control of Congress, "it's over. They will block everything he wants to do."

Most of those who turned out knew why he was here – to promote the candidacy of Republican Renacci.

Renacci is a northeast Ohio Republican, and party leaders worry that he is not well enough known to voters in southwest Ohio.

And it was no fluke that the rally was held in heavily Republican Warren County, which is a part of Ohio's First Congressional District, where long-time incumbent Chabot is facing a formidable challenge from Democrat Pureval, the Hamilton County Clerk of Courts.

Chabot told the Enquirer last week that he didn't ask the president to come to his district to campaign for him, but said he welcomed his presence.

But after Air Force One landed at Cincinnati's Lunken Airport, Trump went first to a Chabot fundraising event before moving on to the fairgrounds to speak in a building that the county says can hold around 3,000 people.

Trump clearly takes Ohio politics seriously for a number of reasons – whether it is hoping to boost Renacci's chances to snatch an Ohio Senate seat from the Democrats, or the push-back he has gotten from day No. 1 from lame duck governor John Kasich, or looking ahead toward his own presumed re-election plans in 2020.

Friday night's rally at the Warren County Fairgrounds in Lebanon was his fourth visit to southwest Ohio since his unexpected victory in Nov. 2016 over Hillary Clinton – a victory that came in part because of an eight percentage point win in Ohio, which had gone to Barack Obama in the two previous elections.