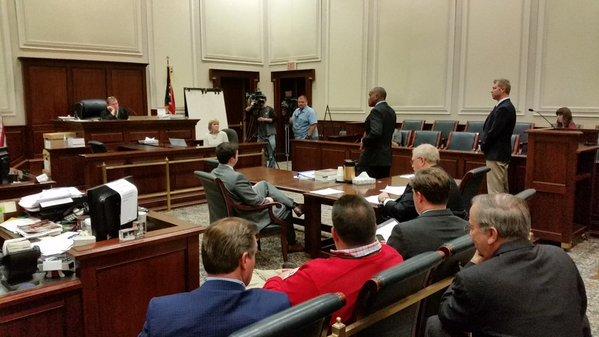 Voting hours for Hamilton County extended by 90 minutes until 9 p.m. so voters who may not have voted because of glitches at the polling places can vote, a judge has ruled.

Hamilton County Common Pleas Court Judge Robert Ruehlmann made the decision after a hastily-arranged  hearing on a motion filed by an individual associated with ResponsibleOhio, the group backing Issue 3, which would legalize marijuana.

Ruehlman said "I think giving an extra hour and a half, just to be fair - make sure everbody gets a chance to vote - I think that's the right decision. That's what I'm going to do."

Ohio Secretary of State Jon Husted issued a directive after Ruehlmann's ruling saying that while the other 87 counties can count their ballots and deliver them to the secretary of state, they won't be reported to the public until after the polls close in Hamilton County.

A standing directive from the secretary of state will mean that any votes cast between 7:30 p.m. and 9 p.m. in Hamilton County will be provisional ballots, according to Board of Elections Chairman Tim Burke. Provisional ballots are counted 10 days later.

Earlier in the day, glitches in Hamilton County's new electronic voter sign-in system caused confusion for some poll workers today and consternation for some voters.

Lawyers for the board of elections and ResponsibleOhio were making arguments before Judge Robert Ruehlmann.

The new "e-poll" system involves scanning a voter's I-D to automatically give him or her the correct ballot.

In numerous polling places around the county, poll workers were having trouble making the system work properly. There were lines in some polling places; and some would-be voters reportedly left rather than wait.

Hamilton County elections director Sherry Poland says there was a back-up to the e-poll system at every polling place.

“Many of the locations are not reporting problems but for those who are experiencing any type of problem, we have provided paper signature poll books and this was done well in advance,’’ Poland said. “They went out to the polling places with the rest of their materials.”

Poland said some poll workers “experienced a little bit of a learning curve in getting the electronic poll books up and running in some locations.”

Ohio Secretary of State Jon Husted, the state's chief elections officer, visited a polling place in St. Bernard Tuesday morning where there were no problems with e-polling.

Later in the day, Husted told WVXU the problems were limited and that he ordered board of election officials to deal with them promptly.

"The problems had to do with the failure of poll workers to use the machines according to the training they received,'' Husted said. "It was not a problem with the machines."

And, in all cases, poll workers should have reverted to using the old paper poll books.

At mid-day, the Ohio branch of the American Civil Liberties Union called on the board of elections to immediately address the issues. Election officials responded by saying they were already doing that.

The ACLU asked for extending polling hours in places where voters left rather than wait. But election officials say there are no plans to extend hours beyond the seven-thirty p.m. deadline. Then, suddenly, ResponsibleOhio went to court to ask for extended hours.