After months, it's decided: Michiganders will vote on abortion rights in November

Friday, the Michigan Board of State Canvassers, acting under an order from the Michigan Supreme Court, put a question before voters this November on whether to protect abortion rights in the state constitution.

Last week, the question was sent to the state Supreme Court after Republican canvassers argued the amendment's spacing and formatting would confuse voters. The group behind the amendment, Reproductive Freedom for All, appealed the decision to the state's highest court. Thursday, the court decided to move it along.

"Ultimately, the system works. It may be put under great stress at times, but it works," said Republican Michigan Board of State Canvassers Tony Daunt, who followed through on a promise to vote to certify if that's what the Michigan Supreme Court ordered. Daunt took issue with criticism leveled against the two GOP members for voting not to move the amendment forward. He said the issue of the petition forms had never been addressed before and the court decision set a precedent that future boards would now have to follow.

"It is really important for us to recognize that this is a victory for the people of Michigan who signed in such record numbers," said Democratic board member Mary Ellen Gurewitz.

It's been a contentious week for abortion in Michigan — one of the only states in the region where abortion remains legal. Wednesday, a judge ordered to bar enforcement of a 1931 law that criminalizes the procedure.

Michigan joins other states such as California and Vermont where voters will see similar state constitutional abortion rights amendments on their ballots this November. 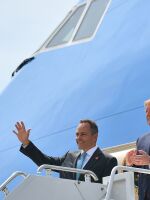