What the DeLay Case Means

This afternoon, the House Republican Conference met in a closed-door session. They chose Roy Blunt of Missouri to serve as their new majority leader, at least until Tom DeLay can return to his leadership job. Blunt had this to say about his new duties.

Representative ROY BLUNT (Republican, Missouri; House Majority Leader): It's not easy to fill the gap left by our leader, Tom DeLay, who's done a tremendous job. But all of our team is going to come together like we haven't come together ever before, I believe.

Blunt has been the number-three man in the House hierarchy, below DeLay and Speaker Dennis Hastert. He'll now serve in the number-two position for a period that could last a year or more while DeLay's case goes to trial. Speaker Hastert first suggested another member for temporary leader, David Dreier of California, but that name ran into rank-and-file resistance from the party's most conservative members.

NORRIS: We're joined now by our regular political analysts to discuss the DeLay indictment and other political developments: E.J. Dionne, a columnist for The Washington Post and senior fellow at The Brookings Institution, and David Brooks, columnist for The New York Times.

Good to see both of you.

Mr. E.J. DIONNE (The Washington Post; The Brookings Institution): Good to see you.

NORRIS: Now DeLay will relinquish his post. Congressman Blunt of Missouri will take his place, but DeLay plans to hold on to his congressional seat. Is this the end of his career as we knew it, whether he's convicted or not, David?

Mr. BROOKS: I think it's likely it's the end of his career in the leadership. For a number of months, and maybe even a couple years, most Republicans in the House have been thinking, you know, `This guy skates close to the edge.' The idea that he's `the Hammer,' that he's this ruthless guy, that's not true. He's a normal guy. He treats his members fairly. But they're tired of him skating close to the edge, and they have been talking for months about getting this guy, Roy Blunt, who's very popular, very well-liked, up in that job just to loosen the baggage on the party. And so I think they will be unhappy to give DeLay back his old job because, you know, he's just one bit of trouble after another.

NORRIS: E.J., your thoughts on this and, also, what it means as the Republicans try to muscle through the president's agenda.

Mr. DIONNE: Oh, well, I think they've lost a lot of muscle in the last couple of months already. I think this is what happens when a party of ideas becomes a political machine, when a culture of money becomes paramount and when political success is dependent upon raising mounds of special interest money. I mean, the basic facts here are not in dispute, that Mr. DeLay converted--and we'll find out whether it's legal or illegal--corporate money into campaign cash so he could pack the state Legislature in Texas with Republicans, who could then change abruptly congressional district lines to give Republicans more seats in Congress.

I think what we're seeing here are the costs of a politics that sees no limits, and it will challenge a lot of principled conservatives to decide where they stand on this culture of money. And I think it's part of a narrative of--you know, whether you want it call it corruption or whether you simply want to call it money politics, it's already started to build: the indictment of Jack Abramoff, who had once been the lobbyist who was once close to Mr. DeLay; David Safavian, the White House top procurement official who was indicted. I think you're seeing a larger narrative here, and that's why I agree with David on one thing, that Republicans probably won't--will want to throw over some baggage over time because this is a problem for them.

NORRIS: If this is the cost, what is the effect of that?

Mr. DIONNE: Well, I think it clearly weakens the Republican Party in the short term, but I think it's a--the real question here is: Does this indictment open a door to discuss all kinds of relationship between money and politics in the city since the Republicans took over the Congress in 1994? I think President Bush took a risk today when he sort of essentially embraced Tom DeLay because I think, you know, the president himself is going to have to defend some things which he may, in the long run, not want to defend.

NORRIS: Well, the president, at least through his spokesman today, continued to defend Tom DeLay. He said that he's a good friend and an effective leader. How will this reach back to the White House?

Mr. BROOKS: First of all, he's an effective leader, Tom DeLay; he and Bush have never been friends. The relationship between those two has never been close; they're very different sorts of people. But the rule is in these cases that you defend somebody in your party; I think that's fair to do.

Just on Tom DeLay, you know, I've never been a fan of his. I've long wanted him to get out of town. I think it'd be good for the country. I can't figure out in anything that's been written today what he did. His--a committee that he's loosely affiliated with or affiliated with did something, but what did Tom DeLay exactly do in some conspiracy to transfer this money is something that nobody--and not the prosecutor or anybody else--has answered. So I don't want us to get out in front of the idea that this guy is going to be convicted. I think we're a long way from that. The legal thing we--it's much murkier than a lot of the hysteria around it is suggesting.

The political thing, though, does seem to me clear. He's been weakened by a whole succession of scandals. And then the other thing he's been weakened by is a feeling of shame in the Republican Party that they've become a big spending party with no sense of priorities, and Tom DeLay is the author of that. He's the someone who I think many Republicans now believe privately has no real conservative principles, but just is hungry for power and will do whatever it takes to give Republicans more seats in those chairs, and that means spending a lot of money. He said something a couple weeks ago, that there was no fat to cut in the federal government, which caused Republican heads to be shaking. And so this comes at a time when he's weak on philosophic grounds, aside from the long-term weakness he's had on the sleaze issue.

NORRIS: Well, you mentioned the long string of scandals. I wonder if given that, and also, since the investigation is also under way into the financial dealings of Senate Majority Leader Bill Frist, if this pretty much ensures that the twin themes of corruption and competence will sort of take center stage in the midterm elections. David.

Mr. BROOKS: Oh, I think absolutely. The Democrats are going to do something like the Contract with America. And, remember, the Contract with America, which Gingrich did in '94, was an attempt to highlight the sleaze in what was seen in the Democratic House--the post office scandal and all that stuff--and they had a whole series of things, like term limits designed to show, `We're not sleazy. We'll get rid of this.' The Democrats will come up with something like that.

Mr. DIONNE: I think you're right that incompetence and corruption--there's even a--it sounds like a slogan to me, and I think that is going to be the issue. And I think there's also a question of whether--there is a pattern here where Republicans basically are not a small government party It's a question of: Whose interests does the government serve? The Republicans will spend money to support their own interest groups to get re-elected in order to cut taxes further on other interest groups that support them. So I think there's a kind of philosophical link to the question of whether we're talking about incompetence and corruption.

And I also think there's a whole attitude toward government, that if you respect government, you are less likely to appoint cronies; you're more likely to want government to work. So that paradoxically the party that is actually more sympathetic to government may actually be more careful in trying to preserve it from corruption.

Mr. BROOKS: This might be a stretch in Boss Daley Chicago.

NORRIS: You know, on the question of competence, this week, the hearings with former FEMA Director Mike Brown--he pointed fingers at the Louisiana governor, at the mayor of New Orleans, but he didn't really mention the Bush administration directly. But I wonder, when people see these hearings, if they see in some way, E.J., the face of the administration or, rather someone who represents a small agency...

Mr. DIONNE: No, I think that's important. And also, in the course of defending himself, he did try to say, `Look, I tried to warn the White House that something bad was happening.' I think what you're seeing now is, in journalism, a question of: Are there more Michael Browns in this government? Time magazine had a very powerful piece this week suggesting that there were other political cronies planted around the government. You know, the idea of...

NORRIS: But you know, it's interesting because Republicans note that they could have written the same piece in previous administrations run by Democrats.

Mr. DIONNE: Right. But I think the question is: Is this different? Senator Tom Harkin said the other day, `I can't understand why they put political cronies in FEMA. Isn't that why God invented the Department of Commerce?' In other words, yes, there's a tradition of appointing--having--giving patronage to some in your party. Putting them in critical places like FEMA or procurement raises a whole different level of issues.

Mr. BROOKS: When I saw Brown, I was reflecting on what a scapegoat he had become. Maybe he was incompetent, but you know, he was a normal guy. He was treated as if--as this incompetent monster. And I happen to think the point he made about the failure of the local authorities is an important point. This was a failure of all levels of government. And as NPR has demonstrated, among the many other news organizations, you know, there were Louisiana agencies, New Orleans agencies specifically designed to deal with this problem. This was the most anticipated problem, a hurricane, we've had in American history, and it was a complete failure.

NORRIS: Well, we'll have to leave it there. Good to talk to both of you. 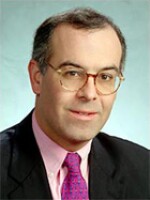 David Brooks
David Brooks is a frequent commentator on NPR's All Things Considered, and appeared frequently on The Diane Rehm Show.
Latest Stories