Jaylon Yates: The Energy of Community and Creativity

Dayton is known for invention and innovation, and there’s a new wave of creative energy coming from the West Side. Young people are making art, with deep commitment to community building and social justice. There’s visual artist Dave Scott, poets Leroy Bean and Kyle Flemings, who’s better known as Atlas the Poet. There’s musician Mariah Johnson, and community organizer Daj’za Demmings, founder of Dayton Young Black Professionals, among many others.

Jaylon, AKA hip hop artist Smb Jay, has his own label, Self Made Boss Records, and Love'Yah is a photographer who often documents the artistic scene. They got together to talk about the new generation of innovation, entrepreneurship, and creativity emerging today from the Land of Funk.

I would create a bunch of different things. I would probably open something for the arts. Cause I feel like a lot of the west side is like an arts type of thing. So I would definitely create like a music center where you can come in and it's different studios, a space for photographers and videographers to come and use the space to do their projects.

And, you know, just something to give the kids on the west side to do, because there's really nothing to do. And everybody complain about kids being outside, but what is there other than outside?

On other creatives he wants to work with on the West Side.
I feel like I surrounded myself around people who are movers and shakers on the West Side. So of course, like Dave [Scott], Leroy [Bean], Mariah J. There's plenty of people I’ve missed, Atlas, you know, there's plenty of people that I feel like they doing great things, not just with poetry or music or anything like that. It's people who are doing community work. Matter of fact, Daj’za [Demmings], with Young Black Professionals. So just being able to have my hands in everything so I can be well diverse with my work and actually make something for the West Side and make it better.

On how to connect the current generation of creatives with the legacy of art and music from West Dayton's past.

I would say utilizing the opportunities that we already have because here in Dayton, in the past couple of years it's been growing. Like we got the Entrepreneurs Center, we got small businesses like Third Perk. Well, Third Perk is growing, it's like three different spots now. So we got different places that we can go to and have fellowship at and grow. So, but I would like to see, just like you mentioned the rich culture, I would like to see something a little bit bigger than the Funk Museum, something that shows Dayton like, a lot of things has come from Dayton and a lot of our culture is a part of the world and the world don't know that it originated here. So I think that's one thing that we can do as a city to push it forward.

On the importance of being surrounded by other young creatives.

That question really reminded me of what people say, like “Find your tribe.” And I feel like once you find your tribe, it helps you stay passionate about what you want to do. And they also help you network and grow in other areas that you, that you might not be as good in. And like a goal that I really want for the city is to have that pride, like we’re Dayton, but hey, we Dayton and we building something here and things have come from here and we're prideful about what we have here.

Dayton is still one of the most segregated cities, but it's definitely making, making a push for it to be more integrated. But, you know, I feel like having that sense of village and your sense of tribe with what Dayton being in mind like this is our overall community, not East Side, West Side, North Side, South Side, but we all together, and this is our city and that's when you will see a stronger village and a stronger tribe. 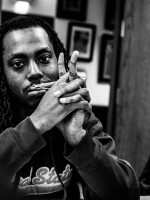 Jaylon Yates
Jaylon Yates, AKA Smb Jay is a Dayton, Ohio native who introduced himself to the music world with his first mixtape Tune Into Greatness, featuring songs like Paradise, Too Major, and Alize’. Jay got into music after observing his older family member Trailz, also a hip-hop artist. In December of 2016 Jay started his own record label Selfmade Boss Records LLC (SMB), and he later added the acronyms to his stage name.
See stories by Jaylon Yates 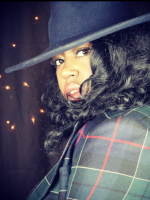