'Meet Me At Midnight' For A Lively Summer Romp

I started reading Jessica Pennington's Meet Me at Midnight on an empty beach in Florida, near where I live on the Space Coast. There are rarely many people at the Canaveral National Seashore, and I thought it would be a fitting place to celebrate a new "summer at the lake" title. That beach is closed now. Looking back, this book and that sand feel like they happened a lifetime ago, in a different world. But that doesn't make Meet Me at Midnight less wonderful in any way!

The tale of Sidney Walters and Asher Marin is the bitingly hilarious enemies-to-lovers story I've been waiting for. It's a bit slow to start, as halcyon lazy summers sometimes are, as we get to know our dueling protagonists. Sidney and Asher are high school seniors. They are both swimmers. Their mothers were college roommates. Every year since they were 14, their families have summered at the lake together — and they love to hate each other, so much so that they've raised pranking to an art form.

Sidney is a classic overthinker, but a brilliant strategist. Asher, on the other hand, has always secretly liked Sidney — but is terrible at communicating his feelings. Each summer is 56 days of exquisite torture for them both, and the book counts as we go along. There are a few unwritten rules about the pranks — for instance, they draw the line at physically hurting one another, but everything else is pretty much fair game. From Kool-Aid showers to fights over the "unicorn chair" to awkward family dinners, the animosity increases in intensity until Sidney takes a prank one step too far and the families get kicked out of their neighboring cabin rental properties. Happily, the Walterses and Marins solve the problem by securing a house on the lake large enough for them all. That's right, Sidney and Asher are forced to move in together.

At which point, in an unprecedented move, they join forces against a common enemy: the horrible landlady who served them the eviction notice. The truce creates a strange atmosphere. Sidney in particular walks on eggshells, waiting for the next round of pranks — that doesn't come. After so many years on high alert, the duo now have to learn to be "normal" around each other, without acting like the other shoe is going to drop. It's eye-opening how much time they've freed up by not having to constantly plan their next move — and how much better they are together than they were apart.

And then Sidney and Asher actually try to make a relationship work. If the book was tough to put down before that moment, it was impossible once this turn of events came to pass!

By the last page of the book — which I finished on my couch in isolation — I had laughed and cried and laughed again.

There's still an underlying sense of competition as they try to out-like/nice/date each other, but sometimes two people who are so good at being enemies turn out to make a great team. All of those intimate details they previously used against one another start to work to their advantage. But trust can't happen overnight — it must be earned, especially between two people who have such a complicated history.

The summer ends, but Sidney and Asher's story doesn't. There are still too many unresolved issues, too many loose ends still untied. Will their paths cross again in college? Did Sidney and Asher let anger get the better of them? By the last page of the book — which I finished on my couch in isolation — I had laughed and cried and laughed again. I highly recommend Meet Me at Midnight to anyone in the need of a fabulous emotional journey — and a bonus summer at the lake.

Alethea Kontis is a voice actress and award-winning author of over 20 books for children and teens. 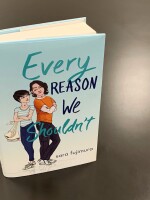