Lots of new music dropped this week. And in case you missed it, don't worry. We've got you covered. My colleague Rodney Carmichael stopped by to share some of his thoughts on two new albums.

(SOUNDBITE OF SONG, "THINGS I IMAGINED")

RODNEY CARMICHAEL, BYLINE: This new Solange album is a real head trip, and it's called "When I Get Home." You know, it kind of reimagines heaven as a place called Houston, if you can imagine that. And hometown hip-hop legend DJ Screw - he's like the patron saint of this whole thing.

CARMICHAEL: Now, Screw is a DJ from Houston who created this style in the '90s of slowing down records. And he would chop them up in this real unorthodox stutter style. And this chopped and screwed style has outlived him by, like, 20 years. And even though this Solange album is classified as an r&b album, it's essentially Screw music. And she's using this to tell her origin story. Just check out this song, "Almeda."

CARMICHAEL: She also dropped a half-hour film for the album, and it's a real kind of avant-garde piece of performance art. It feels a little Afro-futurist, a little Afro-surreal. She's doing everything from twerking in the album. There's some horseback riding, and there's some really ancient rituals that seem to be being acted out. In a lot of ways, it really feels like she's creating her own cosmology with this album. It's like a new way to church. It's a new way to praise. And it really feels like it's a new way for Solange to worship the God within.

SOLANGE: (Singing) Takin' on the light.

CARMICHAEL: Another album I'm listening to that dropped this week is from 2 Chainz. This is the Atlanta trap rapper who dropped his fifth LP. It's titled "Rap Or Go To The League," and it's all about balling in every sense of the word.

2 CHAINZ: (Rapping) When your dreams turn to nightmares, transactions turn to Nike Airs, went to Greenbriar Mall and bought five pairs. I stayed in the Creek, junkies used to preach, in the dope game, trying to reach my peak and go undefeated.

CARMICHAEL: Yeah, now LeBron James - yes, that LeBron James - he actually helped 2 Chainz with the creative direction of this album. And the title of the album, "Rap Or Go To The League" - it kind of plays off the old stereotype - right? - about basketball or rap being the only viable options for young black men trying to get out of the hood. And he starts off the album with this really serious meditation on something else that plagues the hood, and that's death. And that's what we hear him talking about in this song, "Forgiven."

2 CHAINZ: (Rapping) Lease or get murdered in the street. Pray for the children. I pray for our healing.

MARTIN: That was NPR Music's Rodney Carmichael. But here's one artist he forgot to mention - the Jonas Brothers.

MARTIN: Yes, the Jonas Brothers are back together, and that was their surprise new single called "Sucker." 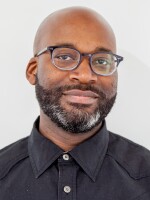 Rodney Carmichael
Rodney Carmichael is NPR Music's hip-hop staff writer. An Atlanta-bred cultural critic, he documented the city's rise as rap's capital outpost for a decade while serving as music editor, staff culture writer and senior writer for the alt-weekly Creative Loafing. During his tenure there, he won awards for column writing, longform storytelling, editing and reporting on cultural issues ranging from gender to economic inequality. He also conceptualized and co-wrote "Straight Outta Stankonia"—an exhaustive look at Atlanta's gentrifying cultural landscape through the lens of OutKast—which was voted as one of the Atlanta Press Club's Top 10 Favorite Stories of the Past 50 Years.
See stories by Rodney Carmichael
Latest Stories