Note: NPR's First Listen audio comes down after the album is released. However, you can still listen with the Spotify playlist at the bottom of the page.

Detroit is famous as an industrial city whose machines have helped remake the world. But among its most beloved exports has been the rhythm of different machines: in music that gets played at parties and in clubs, made predominantly by people of color, and consumed and imitated around the world. Motown! Detroit techno! J Dilla! These are hallmarks of Motor City quality that, for some, leave Camaros and Mustangs eating dust. Detroit music continuously updates itself, as new generations make sleeker models and younger musicians take from their elders, perpetuating new breakthroughs.

It might still be too early to add Jay Daniel, a 25-year-old producer/DJ (and son of the great house vocalist Naomi Daniel), to the city's long list of legendary musicians, producers, DJs and beat-makers. Yet it's certainly not too soon to note that, alongside Kyle Hall and Manuel Gonzalez, he's part of a new generation pushing the legend of Detroit rhythm along. After a four-year drip of singles on some preeminent dance-music labels (Kyle Hall's Wild Oats, FunkinEven's Apron, Theo Parrish's Sound Signature) comes Broken Knowz, a full-length debut that more than lives up to expectations and lineage. These sounds aren't mainstream, but they follow a funky and accessible tradition.

The tools Daniel uses to create are relatively simple: lots of acoustic percussion instruments, various keyboards and synths, a tried and tested Akai drum machine, a couple of samples and loops (tasteful, secret) and, most importantly, a clear sense of history. Broken Knowz is rhythmically and emotionally astute in the way lots of Detroit's great electronic music is: not loud, forceful or brashly innovative (though plenty fits that bill in the 313, too), but with quiet comfort in its creative tensions. The tensions form the music's soul, and on Broken Knowz, Daniel has post-techno soul to burn.

As evidence, look no further than the magnificent "Paradise Valley." While layers of acoustic, polyrhythmic percussion wrap themselves around one another — and as a Fender Rhodes plays a vamp that wouldn't sound out of place in house music described as "jazzy" — the track's lead "voice" mutates, and with it so does the song. At first, the "lead" is an exquisite alien sound (a glass bowl being rubbed) utterly foreign to the rest of the environment; then it's couplets played on a synth (all laid-back funk!); and, by the end of the narrative, it's a solo played on an Arp monophonic synth, invoking Funkadelic and Dam-Funk and In A Silent Way. Then the three begin conversing with one another. And where is this "Valley" that the song attempts to invoke? It was another name for "Black Bottom," a Detroit neighborhood that served as the entertainment center for the city's black community until the 1950s, when it was torn down to build I-75. This is how a "house track" effortlessly and without pretense can also function as a history lesson.

Such moments of groove and intent are all over Broken Knowz. They're in "Yemaya," named after the Yoruban goddess of the ocean, wherein Daniel's live drums talk in South African house riddims but the synth arpeggios are all about local techno deities. And they're in "Squeaky Maya," where the upfront drum-machine programming and its metamorphosing broken-beat signatures seem part of the great ongoing conversation between Detroit and London club producers. The hazy background melody recalls Michael Jackson's "Black Or White," while the keyboards that join in the massive musical uplift at the end seem to form a concrete statement.

And what is that statement, exactly? It's all in your perspective. What for some may just be dance music is, for others, a profound social statement. Jay Daniel seems to recognize that the ghosts inhabiting Detroit's finest machines and rhythms tell many tales. The work you put into translating those stories is its own reward. 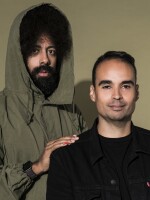