You're listening to ALL THINGS CONSIDERED from NPR News.

Fire managers in Idaho say they may be turning the corner on a massive wildfire near the resort towns of Ketchum and Sun Valley. The Beaver Creek fire has caused more than 11-and-a-half million dollars and forced mandatory evacuations of more than 2,000 homes. Sadie Babits of Boise State Public Radio reports.

SADIE BABITS, BYLINE: Around 250 fire managers quietly gather outside in the heart of fire camp. The sun isn't up yet in this valley flanked by tree and sage brush-covered ridges.

BABITS: This morning, operations managers use a 3-D Google Earth map projected up on a giant board to show where the Beaver Creek fire is.

MOUTAMAN: There's a lot of work being done up in Branch III to look at and going direct, and they have the contingency up along the highway.

BABITS: Crews are focusing efforts today north of Ketchum. They're trying to keep the fire from crossing the main highway. A few days ago, massive flames could be seen from right here in camp. The fire threatened homes all through this mountainous corridor forcing neighborhoods to evacuate.

SUSAN THOMSON: I'm a refugee from the East Fork.

BABITS: Susan Thomson had to evacuate last week. She lives not far from an area known as Greenhorn Gulch where the fire tore through, burning a home.

THOMSON: I didn't expect it was going to explode down Greenhorn. When it did, I then gathered personal things, and Friday morning, I was out.

BABITS: Thomson moved here to escape the wildfires in California. She's been through this evacuation drill before and was ready with what she calls her fire box full of her most important documents. She went to her friend Mary Kimball's house about 10 miles away. Kimball is a horse trainer with a ranch. She says she's taken in 10 horses and a pony. She says that's just what this community does.

MARY KIMBALL: My prayer is that I would always have enough to take care of my own needs, to pay my own bills and help others in need. So it's an opportunity to open the place.

BABITS: Kimball says her son, who's in the outfitting and guide business, lost a cabin not far from Greenhorn Gulch. She says riding lessons, horse trips all have been cancelled because of this fire.

KIMBALL: The fire has impacted a lot of small businesses like his. It's difficult to estimate now how much impact that's going to have. But generally, this is a busy time of year for him, and no one wants to go on a horseback ride in a burned area.

UNIDENTIFIED MAN: How do you find out whether you do have power and gas?

BABITS: At a community meeting last night in Hailey, hundreds packed an auditorium. People asked when they could go home and how to find missing pets. Over the PA system, Larry Schoen, the chair of the Blaine County Commissioners, reassured residents that he understands this area is more than just a celebrity vacation spot.

LARRY SCHOEN: It just seems like the way the world relates to us is that's where Tom Hanks, Bruce Willis and Arnold Schwarzenegger have a home.

SCHOEN: And guess what? We're a real, live, working community.

BABITS: Incident Commander Beth Lund was at the meeting too. Her message to Hailey residents last night was one of cautious optimism.

BETH LUND: That this fire seems to be kind of, you know, under our control a little bit more than it has been, and we feel like we're going to continue to make progress on it.

BABITS: But it could be before the end of September before this wildfire is contained, and firefighters are settling in for what could be a long road ahead. At this morning's briefing, a human resources officer read a passage by John F. Kennedy about courage in the face of major challenges. For NPR News, I'm Sadie Babits in Ketchum, Idaho. Transcript provided by NPR, Copyright NPR. 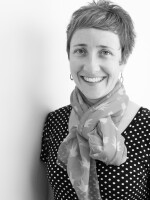