Before IBM's Watson and Deep Blue, there was another celebrity robot: Elektro.

The first robot introduced to Americans, Elektro was the 7-foot-tall man who greeted millions of visitors who streamed through the gates of the 1939 World's Fair. He even appeared on film, in The Middleton Family at the New York World's Fair.

The robot was built as a showpiece for the manufacturer Westinghouse, which made clothing irons and ovens in Mansfield, Ohio, at the time.

But when Westinghouse cleared its warehouses for World War II production, Elektro ended up in the basement of an engineer who had worked on the robot's wiring.

And that's where the engineer's son, Jack Weeks, found him, as a boy.

"I opened one box, and there was the head of a robot there. So we started prying with my dad as to what was in the other boxes," Weeks says. "He showed us ... and we managed to put the head on the torso and played with it as children," wheeling it around in games of cowboys and cops and robbers.

Elektro went back on the road for Westinghouse after the war, visiting county fairs and opening department stores. Weeks went along as an assistant.

Elektro could tell jokes, smoke cigarettes and blow up balloons.

"The little kids, it would drive them nuts," Weeks says. "They'd try a balloon blowing-up contest ... and Elektro always won. He had the biggest compressor."

When Elektro went on tour, no one had seen anything like him. Some people were even afraid of the robot. But gradually, Elektro and his prewar technology became less impressive. He was sent to a California amusement park some time in the 1950s, and Weeks lost track of him for decades.

That is, until his brother bought a house back in Mansfield — and found Elektro's head in the basement. The robot's body then turned up in a barn.

Weeks pieced Elektro back together and placed him on display in the nearby Mansfield Museum.

The museum is sending a replica of Elektro on a national tour this spring.

The old Elektro will stay behind in Ohio, though Weeks hopes that someday America's first celebrity robot will find a grander, permanent home of his own.

"He's just been around for so long in my life," Weeks says. "I intend to see that he's well taken care of in the future." 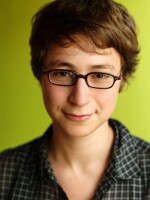