After only one listen to "Mercy," I was hooked on Duffy and interested in getting her story. Where does her sound come from? Is it intentionally "retro"? When did she start singing? Was she a child star? Was she a big fan of Dusty and Lulu? So many questions...

Duffy arrived at WFUV with her band and manager. We had agreed in advance to two songs live, plus an interview, but once the band sound-checked, Duffy asked if they could do three songs. That was more than fine with me. As you'll hear, her voice is the real deal and her story is quite entertaining.

With a voice akin to those of Dusty Springfield and Petula Clark, Duffy got her blue-eyed soul sound in part from her parents' limited record collection. Rough Trade label owner Jeannette Lee heard young Duffy's voice as the teenager sang in Welsh bands. Lee paired her up with former Suede guitarist Bernard Butler to write the songs that would form her debut, Rockferry.

Listen to the previous Favorite Session, or see our full archive. 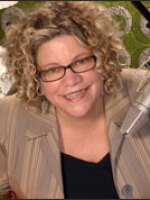 Rita Houston
A nationally recognized tastemaker with a broad knowledge of and passion for music, Rita Houston shapes the musical direction of WFUV's acclaimed City Folk® format. With the help of staff, Houston selects the songs that become part of City Folk®, establishes theme days and creates popular features like "New Release Monday" and "Guilty Pleasures Day." Well-known for her rapport with artists, she books the on-air interviews, hosting a number of them herself. Houston also serves as executive producer of the nationally distributed City Folk Live concert series, and produces annual benefit CDs of performances from WFUV's Studio A.
Latest Stories