As we head toward summer, you may be noticing trees swaying in the breeze or sunbathers in the park. Commentator Ed Cullen is watching people's feet.

Buying new flip-flops signals the start of summer for me. Those slabs of rubber in lime green, strawberry red, plum purple and the ever-popular basic black are cooler than a watermelon buried in a tub of ice. Flip-flops were once considered beachwear or summer house shoes. I got my first pair in junior high school gym class. We wore flip-flops in the shower to ward off mutant athlete's foot. Today people wear flip-flops wherever they want. A friend who coordinates weddings at the cathedral downtown says, `They get married in them. They have little heels and sequins, but they're still flip-flops.'

The sound of flip-flops gives us the weight and importance of an announced arrival. Almost gone is the sound of screened wooden doors creaking open to be yanked closed by long coiled springs. Where's the once familiar slick-slick sound of the motorless lawn mower? Flip-flops survive as sounds of summer, whether they're slapping the heels of swimsuit models or the feet of small children following dogs down tree-shaded sidewalks.

In the winter I walk an old part of Baton Rouge called Beauregard Town. I walk fast for exercise in high-tech running shoes. In the summer those streets are walked best in flip-flops, slowly, the better to look at 19th-century houses wrapped in electric blue morning glory blossoms.

A professor of music at LSU named Bill Grimes gets some friends together each summer to play jazz concerts. The audiences are a mixture of young and old, the older women in summer dresses, a few in heels, their escorts in ties and jackets and dress shoes. The young people show up in whatever they put on that morning. A few minutes before the music starts they sashay in wearing T-shirts, cut-off jeans and flip-flops. Those so shod aren't shunned. Everyone slides down in his chair as the music floats out from the stage. Moms and Pops, those in flip-flops dig the bebop.

BLOCK: Ed Cullen is a columnist with the Baton Rouge Sunday Advocate. 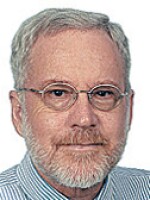